Wand Cores are the "stick" part of a wand. They determine the vis carrying capacity of the wand they are used in. They can be made of several different types of wood or other materials. Note that without attached wand caps, even the most magical wand core is just a stick.

Wand cores can also be crafted into Scepters and Staff Cores. (See also the Primal Staff Core, which has no corresponding wand core.) See the wands page for details on all these variations.

The material that the wand core is made of will determine the amount of vis that the wand can store, and if they can naturally regenerate a type of vis. All wand cores except "wooden" (stick) and greatwood require Infusion crafting to create.

There are three "levels" of wand core that can be used. The level and type of core determines the storage capacity of the wand, staff, or scepter it is used in:

The "wooden wand core", is simply a stick, as crafted from planks. This is the only core that is available without use of a wand, so by necessity, it is used for a thaumaturge's first wand. The wand produced holds only 25 vis of each aspect, and has a serious liability: A wand (etc.) with a wooden core can accidentally drain a node completely in any aspect, which is likely to permanently damage it. This liability remains regardless of the type of cap used, and even if the thaumaturge has researched "Node Preservation". Your Thaumometer, as well as Goggles of Revealing, will allow you to see how much Vis is left in the node; with care, you can stop draining before any aspect drops to 0, and come back once the node has recovered its vis.

The Greatwood Rod is crafted from two greatwood logs in an Arcane Workbench. The wand produced can hold 50 vis of each aspect. If a greatwood or better core is equipped with gold or better caps, and the wielder has "Node Preservation", it will automatically refrain from draining a node's last point of vis in any aspect.

All third-level wand cores require Infusion crafting to produce. This level consists of the elemental cores and the silverwood core. The elemental wands can store 75 vis of each aspect, and wands, staves and scepters made with them can all regenerate up to 10% of their capacity in a single aspect, according to their element. Each of these is crafted by infusing the appropriate material with one shard of their element, and one balanced shard. The essentia required is 6 Praecantatio, 12 of their primal aspect, and 6 of a compound aspect which varies with the core (the Bone wand and staff cores are also forbidden knowledge).

The silverwood wand core can store 100 vis of each type, but does not regenerate any of them. Crafting it requires 9 points apiece of each primal aspect plus Praecantitio, to infuse a silverwood log with all six primal shards and a balanced shard. 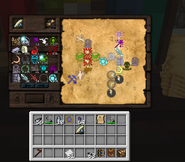 Necromancer's Staff Core Research
Add a photo to this gallery
Retrieved from "https://thaumcraft-4.fandom.com/wiki/Wand_Core?oldid=25088"
Community content is available under CC-BY-SA unless otherwise noted.